Andbank, the specialist private banking institution, has donated €38,871.93 in dividends from the Andbank Microfinance Fund to the Fero Foundation for the second year, more than €15,000 than the previous year. This fixed income fund that invested in micro-loans in developing countries had been promoted in collaboration with the fund manager BlueOrchard. The cheque was […]

Andbank, the specialist private banking institution, has donated €38,871.93 in dividends from the Andbank Microfinance Fund to the Fero Foundation for the second year, more than €15,000 than the previous year. This fixed income fund that invested in micro-loans in developing countries had been promoted in collaboration with the fund manager BlueOrchard.

The cheque was presented at a ceremony attended by Ruben Ventura Masip, Scientific Director of the Fero Foundation, and Nuria Rocamora Pujol, Global Marketing and CSR Manager for the Andbank Group.

The Andbank Microfinance Fund had two philanthropic aims, on the one hand investing in socially-responsible assets, such as micro-loans to entrepreneurs in developing countries, while also donating 80% of its profits to projects run by selected NGOs. The remaining 20% is distributed among the unitholders.

This donation is in addition to the numerous initiatives that the group has with the Fero Foundation. Since the start of its collaboration in 2014, the group has donated more than half a million euros to help fund research and it partners the Foundation in numerous activities. It has sponsored the charity gala in Barcelona for more than five years; it has sponsored various charity galas in Madrid and has collaborated in the sale of charity bracelets, among other activities.

Nuria Rocamora Pujol said, “Cancer has become one of the leading social and healthcare problems in today’s society, which is why the fight against this disease has become a strategic goal for us in terms of social responsibility. We are therefore convinced about the importance of investing in translational research, which we do through the Fero Foundation that works with leading researchers and centres wherever they are, and we are extremely happy to have been collaborating with them for more than five years”. 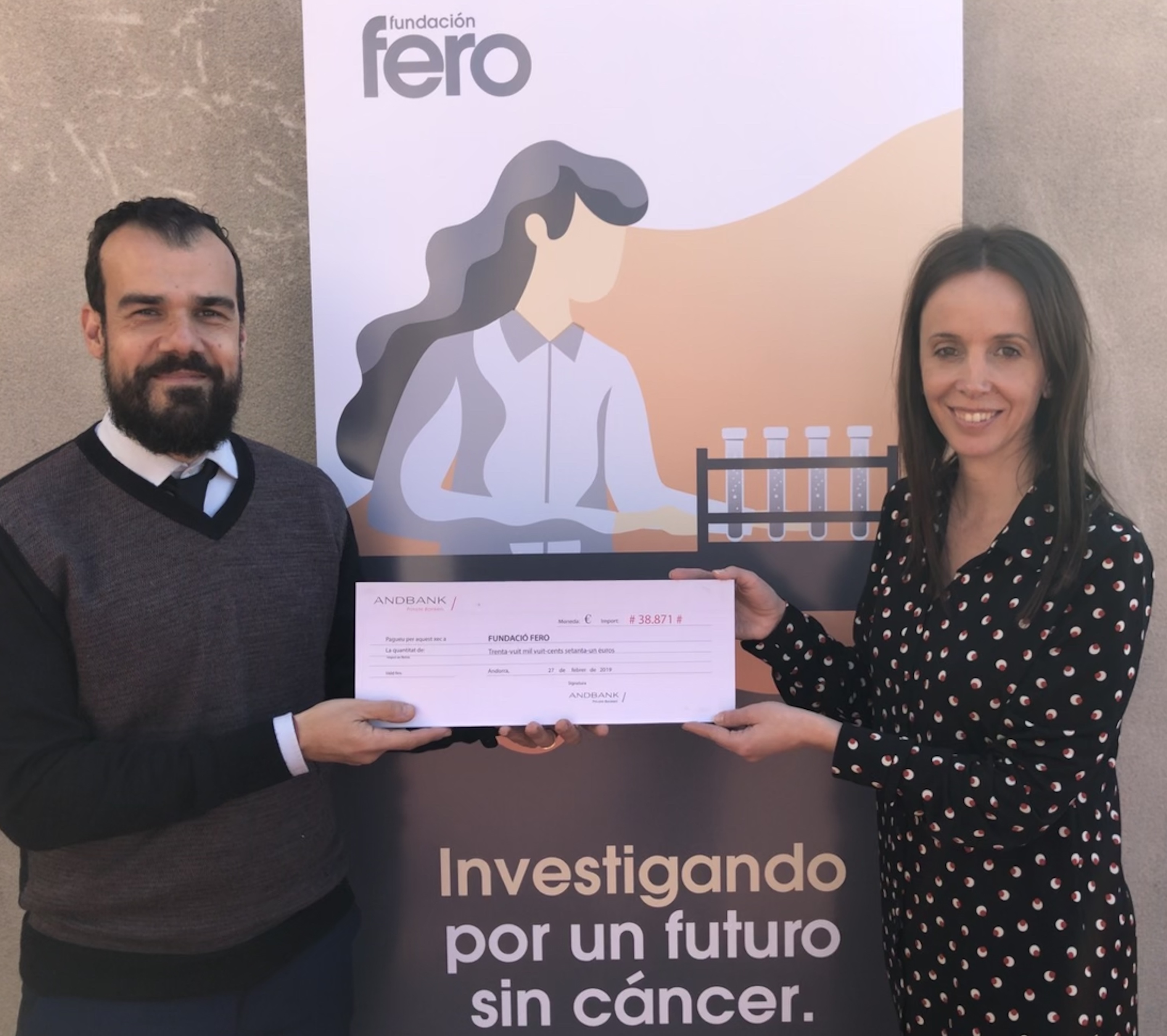 The Fero Foundation is a pioneering institution in promoting translational cancer research in Spain. Its Scientific Director, Rubén Ventura, said, “At the Foundation, 100% of the donations from individuals and companies such as Andbank goes to research projects that we believe will have the greatest impact on society”.

Every year the research grants are presented at a charity dinner which celebrated its 10th anniversary this year and was also sponsored by the Andbank Group.

The first edition of the Fero Grant for Translational Cancer Research was in 2009. The recipient project was research into the Ewing family of tumours, led by Dr. Jaume Mora, head of paediatric oncology at the Sant Joan de Déu maternal-child hospital in Barcelona.

Since its creation, the Fero Foundation has invested more than €14 million in research, of which 1.3 million has been in the form of grants. The institution has financed more than 50 translational research projects and established collaborations with more than ten outstanding research centres in Spain.

About the Fero Foundation

The Fero Foundation is a private institution dedicated to promoting research into cancer. Founded in 2001 by Dr. Josep Baselga, the Foundation is dedicated to translational research, a model based on transferring basic research into clinical results, enabling patients to benefit from scientific advances in cancer treatment sooner. The Foundation supports the Breast Cancer Centre at the Hospital Vall d’Hebron and the Vall d’Hebron Institute of Oncology (VHIO), a leading international cancer institution, among others.

Thanks to financing from collaborating individuals and corporate donors, the Foundation has been able to set up numerous cancer research laboratories; it has promoted research projects that are producing important results; it has financed the acquisition of various pieces of laboratory equipment and since 2009 has granted 16 of its prestigious grants to young researchers. In total, it has financed more than €14 million in exceptional science supporting the country’s best research centres, including the Vall d’Hebron Institute of Oncology (VHIO) in Barcelona and the National Oncology Centre (CNIO) in Madrid.