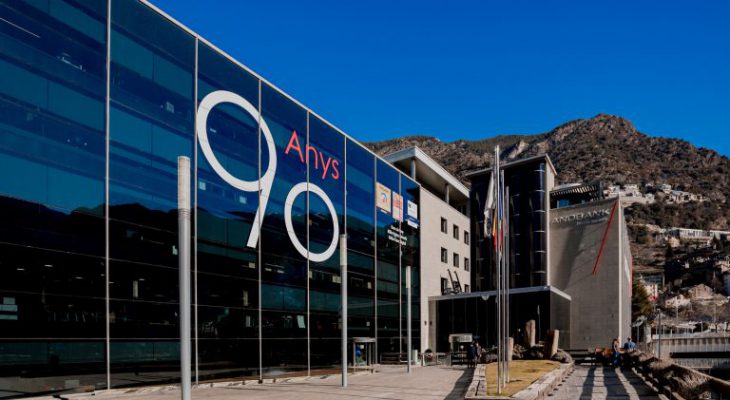 Escaldes-Engordany, 24 March, 2021. Andbank, the international Group specialising in private banking, closed last year with a profit of 29.5 million euros, up more than 5% compared to the previous year. The positive growth of the business in the places where it has a presence, the opening of new offices, and the closing of corporate […]

Andbank, the international Group specialising in private banking, closed last year with a profit of 29.5 million euros, up more than 5% compared to the previous year. The positive growth of the business in the places where it has a presence, the opening of new offices, and the closing of corporate deals has seen the bank increase its volume of assets under management by 11.4%, to 26.567 billion euros. This figure includes the acquisition of Bank Degroof Petercam Spain, a private bank that the Andbank Group acquired in the month of June. As such, in a year that was dominated by the pandemic, the Group’s turnover grew 12.1%, reaching 28.587 billion euros.

The strong results of the bank, which is celebrating its 90th anniversary this year, bring continuity to the growth for the last 10 years, and position Andbank as one of the main reference points for private banking in the Principality and the first in the country by volume of business. This fact has been recognized by the magazine The Banker, from the Financial Times group, which has awarded Andbank as the Best Private Bank in Andorra, as well as the Bank of the Year in the Principality.

The main profitability indicators for the Group confirm the robustness of its business model with an ROE of 5.64% and a ROTE (return on tangible equity) of 13.70%.

Additionally, in 2020 the bank continued its efficient management, which allowed it to reach 538 million euros of internal resources and position its solvency and liquidity ratios above the parameters required by the Basilea III framework and above the European average.

One of the key factors to the success of Andbank Group’s growth has been its commitment to growing on an international level. The bank, which began this strategy in 2008, is currently present in 12 countries, including the main financial centres on a global scale. In 2020, the international area represented 84% of total assets under management.

Diversification on a global scale is one of the main pillars for growth, and one of the reasons why Fitch last year confirmed a long-term credit rating for Andbank of BBB. As well as the “diversification of income sources, greater than those of its national competitors”, the agency also pointed to its solidity and the quality of its assets.

Digitalisation in the context of a pandemic

Within the framework of the Group’s transformation, it is noteworthy that the profit and loss account has absorbed more than 31 million euros of impact in technology. The Group is continuing its commitment to digitalisation, which began three years ago with the aim of making its processes more efficient and offering a service that is ever more agile and close to its clients. Thanks to its platform, the bank has been able to continue operating with normality in all the countries where it is present in a context of lockdown due to the pandemic.

Over the year 2020, the bank continued to take steps in this direction and launched a new operating version of its digital banking platform (e-andbank) and of its app (Andbank Wealth) in four languages. All of these efforts have been recognized by the International Finance magazine as Best Digital Bank in Andorra in 2020.

In this context, of particular note are MyInvestor, Andbank’s neobank. MyInvestor is partly owned by El Corte Inglés Seguros and AXA España, and has recently reached 1 billion euros of business (accounts, investments and mortgages), consolidating its leadership as the biggest Spanish fintech by volume and the 13th in Europe. The neobank has achieved this milestone after having multiplied its volume of business by 10 in just 20 months, from July 2019, when it exceeded 100 million.

One of the pillars and strategic objectives of the bank’s corporate social responsibility is the fight against cancer. With this commitment, the Group will continue giving support as a founding partner of the SJD Paediatric Cancer Centre in Barcelona, to the FERO Foundation and CRIS against Cancer via its Global Sustainable Impact investment fund.

What’s more, during the last year, Andbank promoted a number of initiatives with NGOs with the aim of giving extra support both to research for a cure to cancer, via the First Benefit Gala, as well as other projects that emerged due to the coronavirus crisis.

Andbank Spain grows 21% in the first half of the year and reaches a volume of 15.8 billion euros

Carlos Aso, confirmed as CEO of the Andbank Group