The SJD Barcelona Children’s Hospital celebrates the start of the construction of the SJD Pediatric Cancer Center Barcelona. 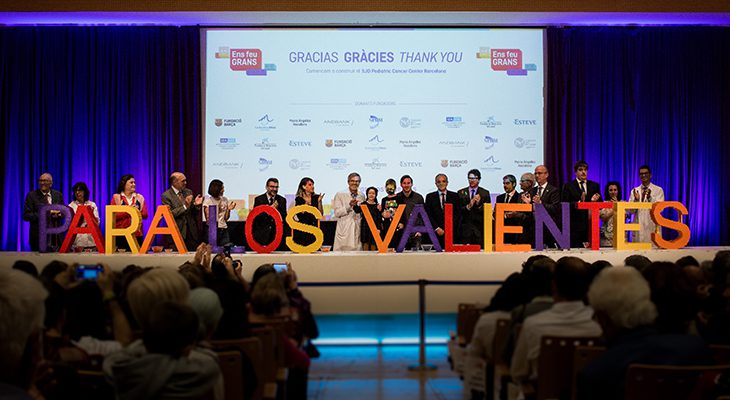 The event counts on the presence of Lionel Messi as the main ambassador of the #ParaLosValientes (#ForTheBraveOnes) campaign • The project has been made viable thanks to the donations and initiatives of over 100,000 private donors, 150 companies and ten founding donors • Since February 2017, the campaign has raised 30 million euros, which is […]

• The project has been made viable thanks to the donations and initiatives of over 100,000 private donors, 150 companies and ten founding donors

• Since February 2017, the campaign has raised 30 million euros, which is the highest amount achieved for a project of this nature in Spain

• Construction will take 2 years, with the centre expected to open its doors in the second half of 2020

Esplugues de Llobregat, 18 October 2018
The SJD Barcelona Children’s Hospital has celebrated the start of the building work of the future SJD Pediatric Cancer Center Barcelona (destined to be one of the largest and most important paediatric oncology centres in Europe) with an event involving many of the donors who made this project possible through their generous contributions.

That is why the symbolic laying of the foundation stone of the future centre of pediatric oncology has been carried out among all (donors, patients, volunteers and workers). Participants have helped build the words “For the brave” [Para los Valientes] with 100,000 pieces of Lego. This large sculpture will preside over the entrance hall of the new centre.

At the beginning of the act of gratitude and the laying of the first stone, 2.7 million of the 30 million that will complete the first phase of works of the future centre were still to be collected. During the appearances of the participants, an unexpected announcement has been made: part of the donors will complete the amount that was missing to achieve the objective.

Who has made the SJD Pediatric Cancer Center possible?

Whilst the new centre owes much to the contributions of thousands of private donors, the start of the building programme would not have been possible without the initial contributions of the founding donors, who not only provided significant economic support, but a number of them will also sit on an advisory council overseeing the development of the programme during its execution. The founding donors are: Fundació Leo Messi, Fundació Barça, María Ángeles Recolons, Stavros Niarchos Foundation, Fundació Bancària “la Caixa”, Andbank, Esteve, Fundació Nou Mil.lenni, Grup Simm Imatge Mèdica and and a tenth entity who would prefer to remain anonymous.

Since the launch of our fund-raising campaign in February 2017, we have raised 30 million euros. This constitutes the largest amount ever raised in Spain by civil society for a project of this nature.
The #ParaLosValientes (#ForTheBraveOnes) campaign counted on the participation and support of the professional football player Lionel Messi, who, together with patients of the Hospital, played a lead role in the recording of some emotional videos aimed at raising awareness of the fund-raising campaign.
The highest economic amount collected among civil society in Spain

During the last year and a half, thousands of private individuals and a considerable number of businesses and other entities have responded to our appeal. Over a thousand private individuals have made financial contributions and helped in the 191 fund-raising initiatives, such as the sale of calendars and badges or the organisation of races, parties and anniversary celebrations. The campaign has also counted on the participation of over 150 businesses, whose donations have contributed significantly in raising the amount we have to date.

Why do we need a paediatric oncology centre in the SJD Barcelona Children’s Hospital?

The SJD Barcelona Children’s Hospital is a medical centre devoted exclusively to maternal and child health, which is a point of reference in Spain for the treatment of child cancer and internationally for the treatment of certain types of tumours. It is the hospital which deals with the highest number of cases of child cancer in Spain and is one of the leaders in Europe: 215 new cases every year, in addition to 70 referrals owing to recurrent cancers or second opinions.
It is one of the few European hospitals that possesses a bank exclusively designated for paediatric tumours, and has a great potential for research. Its professionals apply a translational research model which combines medical care and attention with research, allowing patients to benefit from the most advanced treatments. This model has enabled the centre to:

• Develop live models of different tumours, an essential pre-requisite to test new drugs and treatments
• Develop pioneering clinical trials, such as those involving immunotherapy with dendritic cells in the treatment of diffuse brainstem gliomas; a tumour which has so far proved incurable.
Thanks to this care and research model, the SJD Barcelona Children’s Hospital’s Haematology-Oncology Department has achieved curing levels comparable to those of centres of excellence throughout the world. Currently, 80% of children with cancer who are treated in the hospital overcome their illness.

What will the future SJD Pediatric Cancer Center Barcelona be like?

The new SJD Pediatric Cancer Center Barcelona will be able to treat 400 patients per year, 30% more than the SJD Barcelona Children’s Hospital is able to at present (215 cases each year and 70 cases of recurring illness or second opinion referrals), and will incorporate the latest technologies and methods in the fight against cancer.
• Its facilities will occupy a surface area of 13,196 square meters in a four-storey building adjoining the SJD Barcelona Children’s Hospital, to which it will be connected via a passage way.
• The new centre will have: