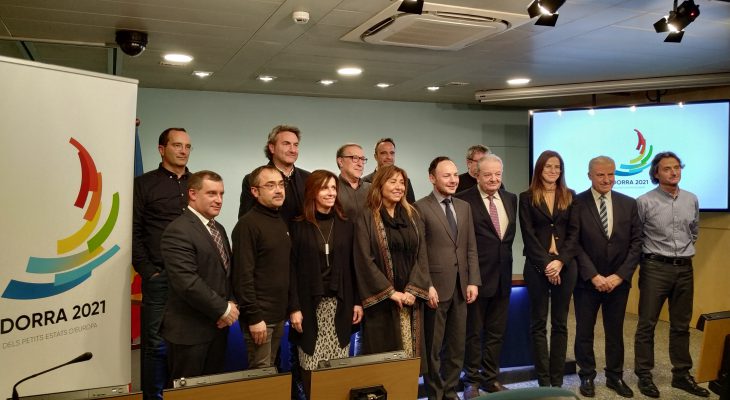 Prime Minister Xavier Espot and President of the Andorran Olympic Committee Jaume Martí have unveiled the graphic image that will accompany the Games of the Small States of Europe (GSSE) to be held in Andorra between 31 May and 5 June 2021.

Prime Minister Xavier Espot also took advantage of his public appearance to praise Andorra for its organisation of the Games of the Small States of Europe: “This presents a huge opportunity to increase awareness of Andorra and showcase the country’s unique qualities and features at a time of international openness, both politically and economically. It will also help us to continue fostering synergies and creating affinities with other small countries around us.” The Prime Minister also pointed out the main pillars that, according to the government, must underpin the organisation of the Games: “Sustainability and respect for the environment, as well as the inclusion and participation of all citizens must be our main priorities and the foundations of these Games.”

The President of the Andorran Olympic Committee, Jaume Martí, briefly outlined the history of the Games and their connection to the country: “The 2021 edition will be the third time Andorra has hosted the Games, which will provide us with another opportunity to experience an event that only ever has positive consequences and must contribute to social cohesion.” Martí also spoke about the benefits of such an event: “For both athletes and civil society, the Games are an event for sharing values and working as a team.”

With respect to the GSSE logo, its creator, Toni Colom, from the Aymara design studio, explained that the symbol represents a colourful flame that seeks to convey a message which is both positive and dynamic, reflecting the country’s open and modern outlook. The design is based on four cornerstones: diversity in harmony, contagious energy, nature and the Olympic spirit. It also incorporates the colours of the Andorran flag and the Olympic colours, and is intended to be a positive symbol of unity that represents the collective movement surrounding the Games, which must serve to unite and mobilise all Andorrans.

The press conference was also used to announce the launch of a competition to design the official GSSE 2021 mascot. Any designer or design studio located in Andorra is eligible to enter this contest. The deadline for submission of projects is 2 March 2020, and all details are published in the competition terms and conditions, which can be found on the websites of the Andorran Olympic Committee and Andbank, the main sponsor of the GSSE.

The top three entries in the mascot competition will also receive financial prizes: €2000 for the winner, €1500 for second place and €750 for third place. In addition, the winner will receive €5000 to develop and produce the mascot, as well as to create all applications required under the competition rules. The jury to select the winner will include designer Xavier Mariscal, who designed Cobi, the official mascot of the Barcelona 1992 Olympic Games.

In addition, in keeping with the goal of encouraging citizen participation, the Planning Committee for the 2021 Games of the Small States of Europe has decided that students at the country’s schools will be tasked with choosing the name of the official mascot, through a competition.