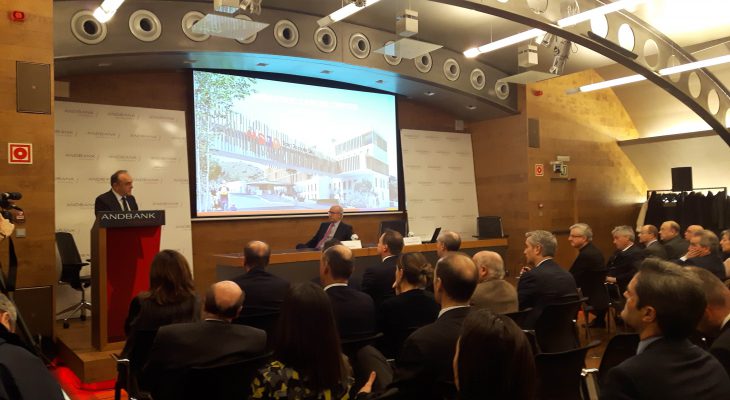 Andbank has been a founding partner of the new centre, actively collaborating in this project to fight against cancer. • The Hospital has managed to raise this amount through the campaign #ParaLosValientes (#ToTheBrave) which it launched in February. • The initiators of the SJD Pediatric Cancer Center Barcelona are launching a new appeal to raise […]

Andbank has been a founding partner of the new centre, actively collaborating in this project to fight against cancer.

• The Hospital has managed to raise this amount through the campaign #ParaLosValientes (#ToTheBrave) which it launched in February.
• The initiators of the SJD Pediatric Cancer Center Barcelona are launching a new appeal to raise the money needed to complete the project.
Escaldes-Engordany, 11 December 2017. Andbank and Hospital Sant Joan de Deu presented their new Pediatric Cancer Center Barcelona project, in which Andbank is a founding partner.
The President of Andbank, Mr. Manuel Cerqueda, and Dr. Manel del Castillo, Managing Director of Hospital Sant Joan de Deu, presented the project for the new hospital at an act attended by His Excellency Mr. Joan-Enric Vives, Co-Prince of Andorra, the Minister of Health, Mr. Carles Alvarez Marfany, the Spanish Ambassador to Andorra, Mr. Manuel Montobbio and other distinguished guests.
The hospital has managed to raise 14,457,927 euros in the past nine months. This is almost half of the 30 million euros needed to build Europe’s largest paediatric oncology centre in the city of Barcelona. With this amount guaranteed, the hospital has decided to begin construction of the SJD Pediatric Cancer Centre in the first quarter of 2018.
The President of Andbank, Manel Cerqueda, said that “One of our social responsibility objectives is the fight against cancer. This is why Andbank wished to support this project and become a founding partner of the new Hospital Sant Joan de Deu Pediatric Cancer Center, Europe’s largest paediatric cancer centre.”

The new SJD Pediatric Cancer Center Barcelona will be able to treat 400 patients a year, 30% more than Sant Joan de Deu currently treats (215 new cases each year and 70 cases of relapse or second opinion) and will use the latest advances in the fight against cancer.
Its installations will cover a total area of 8,400m2 in a four-storey building located next to Hospital Sant Joan de Deu and connected to the main building by a walkway.

Sant Joan de Deu has managed to raise enough to guarantee the start of construction of the new centre through the campaign #ParaLosValientes (#ToTheBrave), which it launched in February to raise public awareness and make the project a reality through both micro-donations and large donations.
Over the past nine months, thousands of individuals and a large number of companies from different sectors have responded to the appeal. These include the Leo Messi Foundation, the FC Barcelona Foundation, Esteve, Fundació Abertis, Ascires and Andbank, amongst others. All have helped to raise the money needed to begin construction. Other companies have also given their support such as Mango, Damm, Nestlé and Grup Constant, as well as sportsmen including Marc Gasol and Marc Bartra.

Micro-donations have also been received through private initiatives by individuals and organizations to raise the funds for the project, which have been very varied and equally important.
The initiators of the SJD Pediatric Cancer Center Barcelona are again calling for donations to raise the rest of the money needed to complete the project. The Goya-winning film director Carlos Marques-Marcet has made a short film that will be shown this January in 90 cinemas belonging to the Cinesa chain, which is also supporting the project. The film aims to raise awareness about the need to build a large paediatric cancer centre that can work towards a cure for the disease and conduct research into new treatments that are less aggressive than those currently used.

Hospital Sant Joan de Deu Barcelona is a centre dedicated exclusively to treating mothers and children. It is a benchmark in Spain in the treatment of paediatric cancer and an international centre of excellence for the treatment of certain types of tumour. It is the hospital that treats the largest number of cases of child cancer in Spain (and one of the most important in Europe): 215 new cases every year and 70 relapse and second opinion cases.

Sant Joan de Deu is one of the few European centres to have an exclusive paediatric tumour bank, providing great research potential. Its staff uses a translational research model combining treatment with research so that patients can benefit from the most advanced treatments as soon as possible. This model has enabled animal models to be developed for different tumours, an essential step for testing new drugs and treatments and completing pioneering clinical trials.
Thanks to this treatment and research model, the onco-haematology service at Sant Joan de Deu achieves cure rates similar to other international centres of excellence. Eighty percent of children with cancer treated at the hospital manage to beat the disease.

How to make a donation to SJD Pediatric Cancer Center Barcelona