Gabriela Orille joins the Top 100 of leading women in Spain 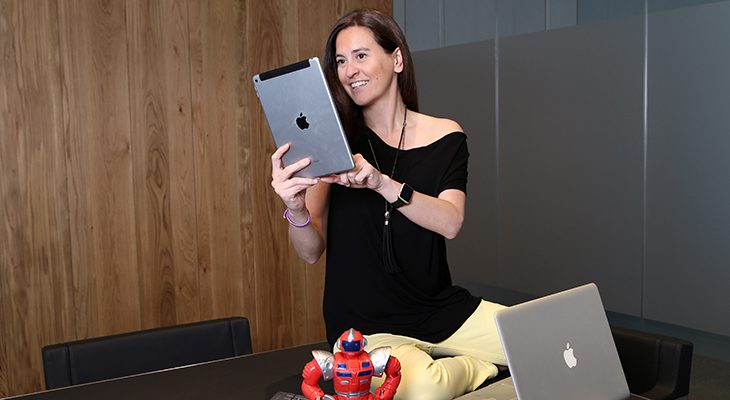 More than 1,000 female candidates took part in the competition organised by MujeresyCía for the seventh consecutive year

Madrid, 25 October 2018 – Gabriela Orille, head of Innovation at Andbank Spain and MyInvestor, has been named one of the most influential women in Spain in the 7th edition of the Top 100 Leading Women in Spain ranking, an initiative put in place seven years ago by the portal Mujeres&Cía which has managed to transform the map of female talent in Spain. Orille has been selected in the category of Revelation and Entrepreneurs, one of the ten which make up the ranking, which includes women from all sectors who have demonstrated their leadership and influence in their fields of activity. Orille has also obtained the greatest number of online votes in her category, to which the jury of experts set up by Mujeres&Cía has added its vote.

Gabriela Orille, an expert in digital banking, fintech, financial innovation and digital transformation with over 15 years’ experience in the financial sector, has been chosen out of a total of more than 700 candidates who put forward their credentials before the summer. Her recognition as one the most influential women in the national scene reflects Andbank’s commitment to include in its ranks the best talent in the industry in order to offer the best service to its clients. The jury of Mujeres&Cía has considered that Orille plays a disruptive and intrapreneurial role, with a focus on the transformation of the financial sector and the new ecosystem which is being created.

“For me it is an honour to share this space with another 99 women who have shown their ability to influence and leadership in their fields. Recognition by Mujeres&Cía represents the backing of the tireless effort by Andbank to encourage technical innovation and the development of new digital services and tools in the financial sector, in particular the private banking sector, which still faces the challenge of adapting to the new digital ecosystem and reaching all citizens through all channels,” emphasises Orille.

The team led by Gabriela Orille is responsible for Andbank Spain’s digital conversion strategy, and has driven the evolution of MyInvestor until becoming a unique role model in the market which combines the concepts of neobank and roboadvisor. Andbank Spain’s philosophy of innovation supports a 360 degree focus which includes clients, bankers and organisation, so that the spirit of leadership in disruption and technological advance permeates all of the bank’s teams and business areas. Thanks to its initiative, and to the firm commitment of the bank and its chairman, Carlos Aso, this new digital spin-off of Andbank has positioned itself as the key neobank in the Spanish market, and a digital role model in financial services thanks, among other things, to products which combine the best of technology and customer service in private banking.

Andbank’s innovation area has driven, among other projects, the launch of a MyInvestor remunerated account, which offers the best market terms and which can be contracted at a click and from any device. In addition, it has led the introduction of novelties such as the possibility of performing important transactions, such as contracting a joint account or performing regular instructions, from a mobile phone.

The Top 100 Leading Women in Spain ranking is an initiative of MujeresyCía to give visibility to women who perform influential roles in society. Those selected this year were announced at a gala held yesterday at the Campus Repsol Auditorium in Madrid, which was attended by the most prominent names in female leadership in Spain.

The ranking is prepared every year and includes women who stand out for their ability to lead and influence, in ten categories including various business, political, educational, scientific and social fields of activity. The jury is composed of 50 outstanding role models in all sectors of society and, while online voting is open to the public, finalists must have the backing of 20% of the votes of the jury. The ranking has been performed for the past seven years and has had 5,000 candidates in the course of its history. Women who are selected in three different editions automatically form part of the Honorary Top 100.