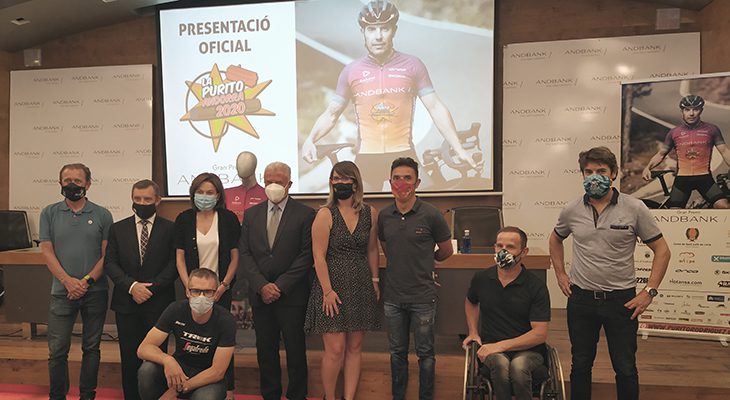 Today, the sixth edition of La Purito Andorra – Gran Premi Andbank was presented in Andorra la Vella and will be held on 13 September. This event was held in Andbank’s convention room and was presided over by its host Mr Josep Mª Cabanes – Andbank’s Country Banking Deputy General Manager – together with Ms […]

Today, the sixth edition of La Purito Andorra – Gran Premi Andbank was presented in Andorra la Vella and will be held on 13 September. This event was held in Andbank’s convention room and was presided over by its host Mr Josep Mª Cabanes – Andbank’s Country Banking Deputy General Manager – together with Ms Verònica Canals – the Minister of Tourism of the Principality of Andorra – and Joaquim “Purito” Rodríguez.

All this year’s new developments were unveiled at the event, which was attended by representatives of the Parishes, the Government of Andorra, sponsors, collaborators, civil protection, police, entities, media and professional sportspeople.

Josep Mª Cabanes opened the ceremony and stated that “we find ourselves at an unusual press conference. La Purito Andorra grows with every passing year and, despite this year’s restrictions, it will continue to be a great success. The Purito has shown us the Coll de la Gallina pass and is a pride for the whole country. I want to congratulate the team that organizes La Purito Andorra.”

For her part, Verònica Canals gave a big thanks to “Purito and all the sponsors involved in this sixth edition for their efforts in the face of these difficult times. La Purito Andorra is key for Andorra’s exposure and has a big impact on tourism in the country, helping to position Andorra as a key destination for cycling. For this reason, we have signed a new agreement with the cycling tour extending it until 2022.”

Joaquim “Purito” Rodríguez emphasized that “we will celebrate the sixth La Purito Andorra under very special circumstances following all the necessary safety protocols. La Purito would not be possible without its sponsors. I hope it’s an unforgettable year and that on 13 September everything goes perfectly on a fantastic day for cycling. It also brings me great pleasure to present Markel Irizar as the cyclist of honour for this edition.”

Markel Irizar was thrilled to attend the presentation and remarked after the event that “for me La Purito is more than just a cycle tour; Angel Edo and Purito Rodríguez are great friends, I’ve always had an incredible relationship with them and, honestly, it is a great honour. I love Andorra and its mountains, I’ve come here many times and have a lot of friends in the country. I feel privileged.”

When speaking about Markel Irizar, Angel Edo – director of La Purito Andorra – said that “it is a luxury to have a domestique who has worked so hard to help his team leaders achieve big wins; riding as a domestique for Armstrong, Contador and the Schleck brothers, among others. For this reason, we are thrilled to have Markel, who has earned both sporting and personal respect.”

As for the new developments in this exceptional edition, there will be a few changes to the La Purito Andorra route. There will be a change in the route of the longest distance, known this year as 4.8 (+4,800m and 120km). It will start in Sant Julià de Lòria and climb La Rabassa as the first pass of the day, followed by La Gallina, Comella, Beixalís, Ordino and Els Cortals d’Encamp. All of this is to improve safety.

On the other hand, following the COVID-19 Safety Protocol approved by the Ministry of Health, La Purito Andorra will hold videoconferences to inform the participating cyclists; there will also be safety distances at the start and finish, hand cleaning and use of masks. The Feria del Corredor (Cyclists’ Expo) will be held over the course of two days – Friday 11 and Saturday 12 – so that people will not be so crowded when they come to pick up their numbers. It should also be noted that this year participants will depart in groups over a period of 2 hours. In addition, a bag will be given to each participant at the feed zones. All this will serve to prevent crowding and to ensure the safety of the participants at all times.

As of Wednesday 22 July, registration will be reopened until the maximum of 1,800 participants is reached. None of this would be possible without the volunteers who are helping the event to take place and ensuring all the COVID-19 protocols are complied with.