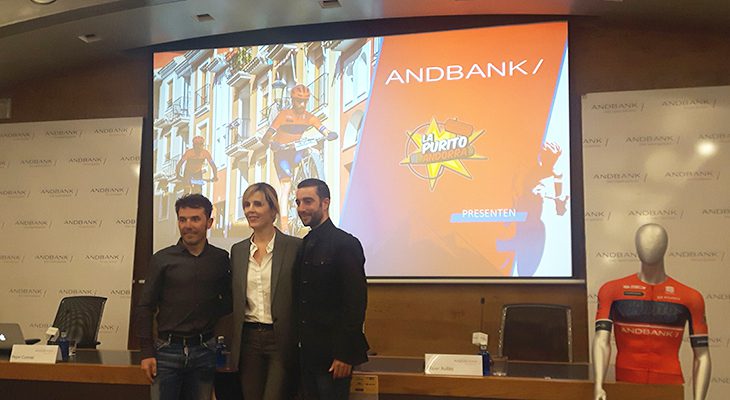 Tuesday, 19 February 2019
The Andbank Business Centre in Andorra la Vella was the setting for the official presentation of the new Andbank – La Purito Andorra cycling team, an original idea from Joaquim “Purito” Rodríguez. A new project linked to the La Purito Andorra brand and that starts rolling with the aim of entering the world of mountain bike racing, as well as participating in national and international cycling sportive events.

The Andbank – La Purito Andorra team made their debut in competitions a few weeks ago in the Costa Blanca Bike Race, part of the International Cycling Union calendar and where they achieved a great result, always up amongst the 10 best teams in each stage.

Joaquim Rodríguez has stressed that “the new Andbank – La Purito Andorra team wants to grow over time, increase the number of members and have a presence in different cycling disciplines. We want to support a racing team and we are very happy that Andbank is backing us in this project that is going to have a presence in national and international races”.

Oliver Avilés, for his part, added that “we are proud to be part of this team, and I would like to thank Andbank and La Purito Andorra for the commitment they have made. I’ve known Purito since I was little and it’s a dream come true to be able to compete together.

Andbank representative Anna Olsina said that “We’ve been working with Joaquim for five years in the great “La Purito” cycling sportive and we don’t want to miss out on participating in this new project, because we believe that these great professionals, Joaquim and Oliver, won’t stop working and trying to achieve everything they set out to do.

The team has set out an ambitious calendar with nearly 20 races, among which the Andalucía Bike Race and the Titan Desert stand out in mountain bike racing. As well as other well-known cycling sportives including Nove Colli and GF Sportful in Italy, La Purito Andorra and Sea Otter Europe. Oliver Avilés will also participate in three mountain bike World Cup races with the aim of getting some experience and gaining UCI points.

Andbank Group grows 20.5% in business volume to €32.7 billion and achieves a profit of €27 million