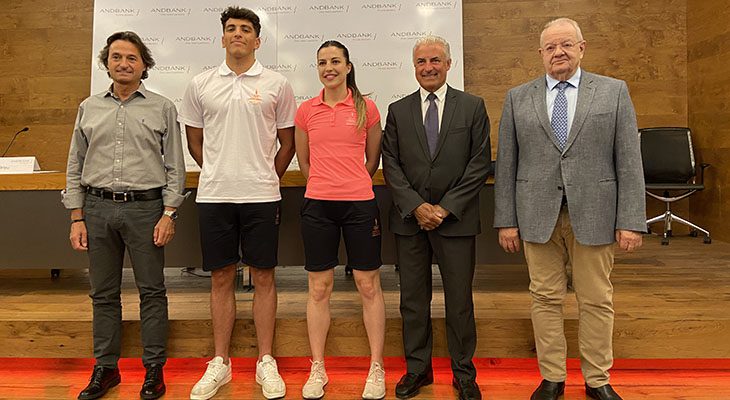 The Andorran delegation will participate in 4 sports: petanque, karate, swimming and athletics.

The COA (Andorran Olympic Committee) presented the delegation that will take part in this year’s Mediterranean Games in Oran, Algeria, and the gear that the athletes will wear today at Andbank’s headquarters. The games will be held from 25 June to 5 July.

The event was attended by Josep Maria Cabanes from Andbank, COA President Jaume Martí and Head of Mission Jordi Orteu, as well as the karateka Sandra Herver and swimmer Patrick Pelegrina.
Orteu informed the members of the Andorran delegation that they will participate in 4 specialities:

26 Mediterranean countries will take part in these games, including France, Spain, Cyprus, Greece, Italy and Monaco from Europe, Turkey, Lebanon and the Syrian Arab Republic from Asia and Morocco, Tunisia and Algeria from Africa. According to Orteu, “everyone thinks these games aren’t very important, but the level is really high; as you can see, there are powerful countries and with the President we’ve even seen world records at them”. The level is the best in the world”.

Josep M. Cabanes encouraged the athletes to “get the best results, which we know they will try to do”. He also commented that “for Andbank it’s a pleasure to continue supporting the country’s athletes, and competition after competition they show us that there’s a good group in the country that continues to make a great effort and work hard to achieve excellent results”.

Jaume Martí declared that “this delegation is more important than usual, because it contains lots of young people, and they’re the ones who are up and coming, making it possible to continue our success at the next games”. He also commented that “it will be a pleasure to work towards 2024 in Paris and especially 2025, which will see the Games of the Small States held here at home, and we hope to equal our achievements in 2005 with great success and many medals”.