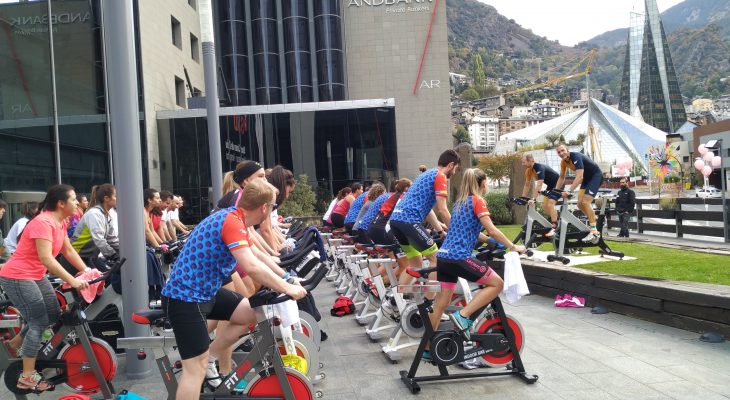 Andorra, 21 de octubre de 2019. Andbank held two charity events to mark International Breast Cancer Day, which took place this Saturday 19 October, as part of its corporate social responsibility work and to contribute to cancer treatment and research. Specifically, on Friday 18 October the organization held a charity breakfast at its headquarters in […]

Specifically, on Friday 18 October the organization held a charity breakfast at its headquarters in Escaldes-Engordany in which all staff from the main office took part. On the following day, Saturday 19, around 100 people cycled for breast cancer in an outdoor spinning masterclass held in the building’s courtyard.

The two initiatives enabled Andbank to raise a total of 2,180 euros, thanks to contributions from its own staff, from those registered for the class, those who made a donation and from the sale of T-shirts. They were also supported by Comú d’Escaldes Engordany, ASCA (Association of Andbank collaborators), NEXT Gym and Monkey Trainer, who provided the bicycles for the masterclass, and the instructors who gave the classes free of charge.

The money raised will all go to Assandca, the Andorran Association against Cancer, and to the FERO Foundation, a private organization whose objective is to contribute to the development of oncology research and with whom Andbank has been collaborating for three years.

After the spinning session, Anna Olsina, Business Director for the Andbank group, stated that “the fight against cancer represents a central element in Andbank’s corporate social responsibility, and we contribute to it with initiatives like the ones that took place this weekend and our collaboration with Barcelona’s Hospital Sant Joan de Déu to build a children’s oncology centre”.

For his part, Justo Ruiz, the secretary of state for sports, referred to Saturday’s masterclass as “a sign of Andorran society’s solidarity”.