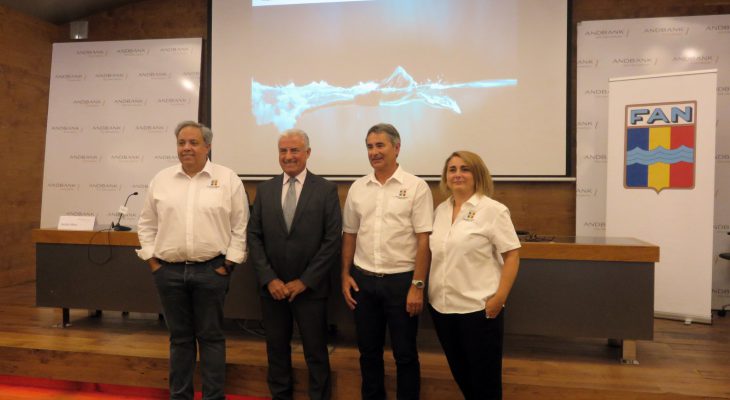 Andorra, 30 September 2019.A press conference was held today by Andbank and the Andorran Swimming Federation (FAN) at Andbank’s headquarters to review the 2018-2019 season, which was full of successes for the Andorran swimmers, and to set goals for the 2019-2020 season. The coming season will be marked by the Olympics and other competitions such […]

Andorra, 30 September 2019.A press conference was held today by Andbank and the Andorran Swimming Federation (FAN) at Andbank’s headquarters to review the 2018-2019 season, which was full of successes for the Andorran swimmers, and to set goals for the 2019-2020 season. The coming season will be marked by the Olympics and other competitions such as the LEN Euro Cup in Budapest, the Spanish and Catalan Championships and the Mediterranean Cup in Kavala, Greece, where the Andorran athletes will prepare for the Games of the Small States of Europe, to be hosted by Andorra in 2021.

As regards the season review, the representatives from the FAN and Andbank, which has supported Andorran swimming by sponsoring the Federation for the last two seasons, highlighted the three medals won at the Games of the Small States in Montenegro and the more than fifty records achieved by Andorra at events such as the under-12 and under-14 championships in Catalonia and the under-12 championships in Spain. They also mentioned the records set by Nadia Tudó, Mònica Ramirez and Bernat Lomero at the World Aquatics Championships held in Gwangju, South Korea.

In terms of the future, FAN Vice President Joan Clotet pointed out that “from now on what we want is for the national swim team to be proud to represent the country and, above all, to put their hearts into it, which is why the Federation is committed to guiding them”. He also announced that it would unfortunately not be possible to hold the Comen Cup in Andorra, which was scheduled to be held in 2020. The main reason behind this decision is that, without the Serradells pool, there are no pools that fulfil the conditions required for this competition. Clotet also announced that Hocine Haciana would be joining the team as a second coach to assist Torrallardona, acting as a second trainer and helping prepare the swimmers.

Josep M. Cabanes, Deputy General Manager of Domestic Banking at Andbank, stated that “as the main sponsor, we are proud of this Federation. It deserves our congratulations for achieving such good results despite having to work with such a small team”.

Xavier Torrallardona, FAN Director of Coaching since 2018 and seven-times Spanish 1500 m freestyle champion, said that “Andorra has the capacity to compete with major countries in the Games of the Small States; we need a strong team, a facility for the team to train in, high-quality training and, above all, monitoring”.

Lastly, Natàlia Meca, Director of Coaching for Synchronized Swimming, said that “we are very pleased with the team’s performance, particularly at the Andorra Open”. She also added that “our goals for the new season are to improve our coaching duo for the Swiss Open”.

On top of its support for the FAN, which in recent years has taken the form of sponsorship of events such as the Andbank Trophy and the European Junior Synchronized Swimming Championships, Andbank supports Andorran sport by working with the Andorran Olympic Committee (AOC), the cross-country and freestyle ski teams of the Andorran Ski Federation (FAE), and the La Purito Andorra bike race.