Sponsorship agreement between Andbank and IRONMAN 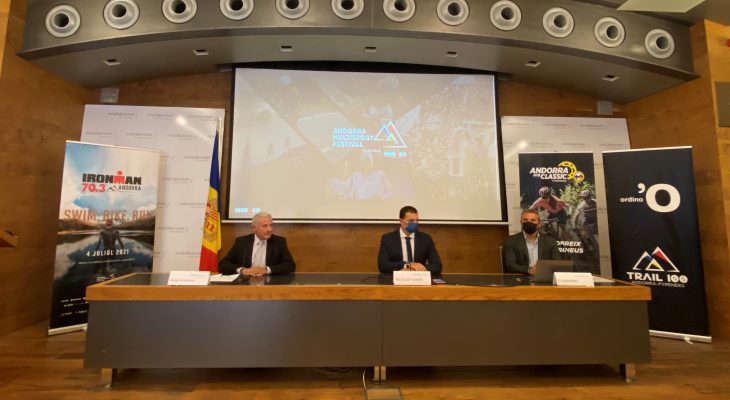 Escaldes-Engordany, 21 June 2021. Andbank and The IRONMAN Group have reached a partnership agreement to sponsor three of the five events in the Andorra Multisport Festival, which will begin on 24 June. Andbank has joined this major sporting event, which is expected to attract a total of around 3,000 athletes for all the races. The […]

Andbank and The IRONMAN Group have reached a partnership agreement to sponsor three of the five events in the Andorra Multisport Festival, which will begin on 24 June. Andbank has joined this major sporting event, which is expected to attract a total of around 3,000 athletes for all the races.

The races that the bank will sponsor are: the IRONMAN 70.3 Andorra, the main triathlon event of this well-known brand; Andorra MTB Classic-Pyrenées, a mountain bike race in pairs that will pass through La Massana, Canillo and Sant Julià; and the Trail 100 Andorra-Pyrenees, a mountain race with four courses of different lengths for athletes of all levels, which will be held in Ordino.

The arrival of the Andorra Multisport Festival can have a very significant economic impact on the country and consolidate triathlon, a sport that has many fans in the Principality, as well as attract many other international athletes.

The opening of this Sports Festival will take place on 24 June 24, and the festival will culminate in the main event, the IRONMAN 70.3 Andorra, on July 4. This race will involve swimming in one of the largest lakes in Europe at Engolasters, cycling in the Escaldes Engordany, Encamp, Canillo, Ordino and La Massana parishes, and running in the Valira river area, through Andorra la Vella.

During the two weeks in which the races will take place, the Village will be set up in the Central Park of Andorra la Vella, with tents in which the Festival sponsors and partners will have a presence.

Andbank is confident that this sporting event will be very successful «and we believe that it will be the first year of an event that will be consolidated and become a leading triathlon event over the coming years,» said Josep M. Cabanes, Deputy General Manager of Banca País at Andbank. He added: “Andbank has always supported sport because as a bank we identify with some of its defining values, such as effort, perseverance and dedication”.

Agustí Pérez Capdevila, Southern Regional Director of IRONMAN Europe, Middle East and Africa said: «We are happy to work with such a prestigious bank as Andbank, , with which we share such important values to us as constancy and perseverance. We are certain that our joining forces will have a significant impact on the country’s economy”.

The Government is very happy that a bank such as Andbank has joined an event that seeks to combine sport and business in the sports industry, and that will position the country as a quality destination for mass sporting events, which in turn will attract companies in the sector. The Minister for the Presidency, Economy and Business emphasised that “having a sponsor like Andbank shows the bank’s commitment to the country and the event, and reflects the strength of the sports sector in the country’s economy”. He added that “The sports industry is a strategic sector for the government, which was recently declared of national interest, and this makes this sponsorship even more special, because it reflects the sponsor’s sensitivity towards the country’s economy”.

The cross-country ski team aims to improve every season